Every day I talk with atheists, Protestants, and other non-Catholics about my faith. Sometimes the discussion is personal, with me sharing how Jesus has changed my life. Other times it centers on moral issues like abortion, homosexuality, or contraception. And still other times I deal with objections to things like the male-only ordination, the Church’s “anti-science” stance, or her bold claims to authority.

Through it all, I’ve learned that no matter what the topic is, what matters most is the way I choose to dialogue. Reason and logic are important. It’s certainly necessary to deliver sharp, well-reasoned explanations of why I believe what I believe. But even when I present an air-tight defense of Jesus’ divinity, for example, if I’m a jerk, nobody cares.

The key to evangelizing is joy.

Everyone is drawn to joy, as St. Thomas notes, which makes it the ultimate magnet. Look at the best evangelists down through the centuries and you’ll see this. Most drew people in through their warmth and charity. They were gracious people first, great intellects second. And they prove that most people respond to kindness before logic and charity before truth.

Now don’t get me wrong. This isn’t an either/or situation. We need both charity and truth (see: Caritas in Veritate). Yet I think we emphasize the latter more often than not. You can see this by scanning Catholic websites and bookstores. You’ll find thousands of good resources on apologetics, philosophy, logic and more. But there aren’t many that teach you how to share your faith with joy and love.

So to that end, here are three ways I evangelize with joy in my own life:

A smile is perhaps our most powerful evangelistic tool–and one of the most neglected. St. Teresa of Avila famously said, “a sad saint is a bad saint,” and the same is true for evangelists. 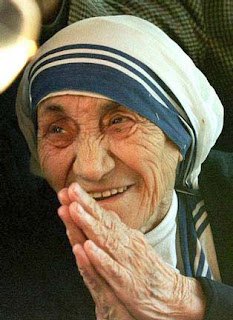 Just look at Mother Teresa. Despite her dark night of the soul, she walked around with a beaming grin and it was contagious. She knew its value and liked to remind people that, “peace begins with a smile.”

When discussing your faith, keep reminding yourself to smile. This small act communicates joy more than almost anything else. You’ll find that smiling actually improves your tone as well, making it more jovial and upbeat.

During my interview on FoxNews a few months back, several friends told me the Fox online chat room was filled with atheists claiming I “smiled too much” and was “too happy.”

I loved hearing that.

It meant most of them had only experienced dry, solemn Catholics. Perhaps I gave them a new face. Maybe I showed them that joy and Catholicism are not mutually exclusive.

As an aside, it should be noted that smiles are just as powerful online. Not because your dialogue partners can see it, but because it affects the way you write. When you participate in a heated combox discussion, try to smile as you type. Just as your physical position shapes the way you pray, so smiling will affect your words and tone online.

When this happens, it’s often tempting to go on the defensive. You want to launch a powerful natural law defense or fight back with statistics and sharp rebuttals. 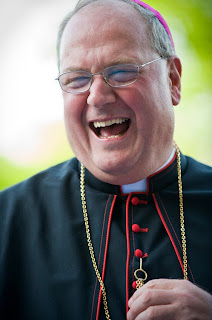 But don’t fall into that trap. Don’t feel as if you’re the lone ranger, bulwarking the Church against a vicious onslaught. Instead, spin the critique around, go on the offense, and calmly emphasize the positive.

Cardinal Timothy Dolan is great at this. He practices what John Allen calls “affirmative orthodoxy,” which emphasizes what the Church is for rather than what she’s against. It focuses on her huge “Yes!” to life, love, and joy rather than her “No” to evil and sin.

Here’s what it looks like in practice. Suppose someone frames a question about “homosexual marriage” by asking, “Why does the Church discriminate against homosexuals? Why doesn’t it want them to be happy?”

Your first inclination may be to angrily fire back with reasons why homosexual activity is sinful. That may be true, but it’s not winsome.

A good alternative would be to respond like this (with, of course, a smile):

“Oh, we Catholics want everyone to be happy! We cherish each man, woman, and child and we’re convinced that every person deserves a life full of love and joy. We vigorously protect that.

And you’re right that regardless of one’s sexual orientation, all people were created by God with supreme dignity, which means nobody should ever be unjustly discriminated against. I’m with you there.

And when it comes to marriage, the Church is the biggest proponent. We’re convinced that marriage is the bedrock of society and worth fighting for. Yet central to that institution is the procreation and education of children. Without that, marriage collapses, and so does the society around it.

So we value both the dignity of every person and the supreme value of marriage. We’re the strongest proponents of each and will support them till the end of time.”

See how instead of beginning with a “no” to homosexual marriage, we start with the Church’s “yes” to dignity and love. This is so important since it’s easier to communicate joy with a “yes” than a “no.”

Now later on in the conversation, you can move to the particular reasons why the Church says “no” to certain things like homosexual marriage. There’s a time for that. And I think Cardinal Dolan handles it best again when he explains that the Church only says “no” to other “no’s”. For example, when people say “no” to the life of an unborn child, the Church is forced to reply with a stronger countering “no.”

But begin with affirmative orthodoxy. When facing a prickly question, don’t let your blood boil. Don’t feel like a crusader against a vicious onslaught. Instead, think “OK, how can I emphasize the Church’s great ‘Yes!’ to all that’s good, true, and beautiful?”

3. Learn from the greats.

In my mind, the two most effective evangelists today are Cardinal Dolan and Fr. Robert Barron. Both are brilliant by any measure. Both are clear thinkers and great writers. However most people are drawn to them because of their warmth and charisma.

We can learn a lot by studying their joyful style. In Dolan’s case, I highly suggest his new book-length interview with John Allen titled A People of Hope. There he tackles controversial issues, again and again, with great joy and aplomb.

You can also see Dolan Mode in action through many videos online, including this one:

To learn from Fr. Barron, read his marvelous book, Catholicism: A Journey to the Heart of the Faith, or catch any of his 180+ YouTube vignettes. Here’s one where he explicitly discusses the power of joy in evangelization:

To Cardinal Dolan and Fr. Barron I’d also add Fulton Sheen, Fr. Jim Martin, Mother Teresa, Pope John Paul II, and Pope Benedict XVI. Read their writings, watch them on YouTube, and study their methods. By learning from the greats, you’ll discover how to evangelize through smiling, humor, and happiness in your own life.


So there are my three strategies. For even more check out a wonderful new book by Austen Ivereigh titled How to Defend the Faith Without Raising Your Voice. It’s a field-guide to “affirmative orthodoxy” which will help you share your faith with clarity and joy. The book was just released by Our Sunday Visitor and I’m hoping to review it soon. Here’s the publisher’s description:

“It is about winning friends, not arguments. It is about shedding light, not heat. It’s about reframing the argument so hearts can be opened and minds can be inspired. 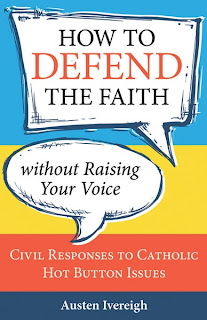 How to Defend the Faith without Raising Your Voice is a new sort of apologetics. It is for those moments when you are thrust into the spotlight as the token Catholic whether the spotlight is simply at the office water cooler or whether it is front and center at the in-laws Thanksgiving celebration.

The book gives Catholics a fresh way of explaining the Church’s teaching on contentious issues humanly, compellingly, and succinctly.

But this book does not pretend to suggest it is as simple as memorizing a speech. Every conversation is different. Every day’s news cycle will bring new arguments and new challenges. Instead, it is a book about what the issues really are and where the criticisms are coming from so you can understand and communicate effectively.

It is the fruit of a group of speakers and experts brought together by a single idea: to make sure that Catholics and the Church were represented properly in the media when Pope Benedict came to visit the UK in 2010. Their original and thoughtful approach helped make that visit a triumph and now it can be expanded for a much broader use.

Whether read in groups or alone, studied in schools or parishes, How to Defend the Faith without Raising Your Voice offers the same thorough briefings on hot topics and the same top tips for effective communication which helped make the project such a success.”