Skip to content
Be sure to watch my video interview with Christopher, and also check out out the Patheos Book Club this month for more great discussion about this book. 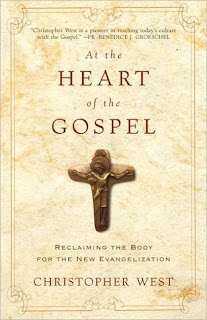 Chances are when you hear the phrase ‘theology of the body’, Christopher West is one of the first people you think of. West has written several books on the topic and has helped thousands of people unpack these teachings from Pope John Paul II, which primarily concern the purpose of our bodies and the meaning of love.

Yet with all of his success, he has attracted some criticism. Some moral theologians, like Dr. Alice von Hildebrand and Dawn Eden, say West reduces the ‘theology of the body’ to sex, and that he sees the whole of Christianity through that narrow lens—everything from Mary, to the Easter candle, and even the Eucharist.

Others lament his presentation style, claiming it’s too graphic or irreverent. West wasn’t helped by a 2009 Nightline interview in which he compared John Paul II to Playboy-founder Hugh Hefner, explaining how both men rebelled against prudish Victorianism. When it finally aired, the interview misconstrued his comments and made it seem as if West had an equal respect for both men.

All of this criticism, combined with West’s own burnout and workload, finally convinced him to take a sabbatical in mid-2010. For six months he stepped away from the limelight. He got some rest and spent time with his family. And he reflected on his approach to the ‘theology of the body’.

The fruit of that sabbatical is a new book titled At the Heart of the Gospel: Reclaiming the Body for the New Evangelization (Image books, paperback, 304 pages). One endorsement describes the book as “West’s Apologia Pro Vita Sua”, an allusion to John Henry Newman’s classic text on his journey toward Catholicism.

Like Newman’s book,  At the Heart of the Gospel  responds to specific questions and criticisms. And like Newman, West responds to the criticism with great humility. He doesn’t cast it aside without engagement but instead engages it and accepts it at places.

At the Heart of the Gospel summarizes much of West’s past work. It includes several long quotes from his other books and readers will find familiar themes like “the great mystery” from Ephesians 5, the divine symbolism in the Song of Songs, and the “wound of Puritanism”, which still haunts the modern culture. West considers the ‘theology of the body’ to be the cure for this particular wound and for the other extreme: the idolization of the body.

As in the Pope’s original teachings, the book places a strong focus on “the great analogy of spousal love”. In fact, according to West, this is the “central proclamation of John Paul’s ‘theology of the body’.”:

“(This analogy concerns) the ‘great mystery’ of creation as male and female and the call of the two to become one flesh, (which) was created by God to be the primordial sign of his own ‘Great Mystery’: his eternal exchange of Love and our destiny to share in that exchange through the holy nuptials of Christ’s union with the Church.”

One roadblock to entering this ‘great mystery’ is what theologians call concupiscence—the tendency toward sin. In the sexual realm, concupiscence often appears in the form of lust, and it’s here we arrive at a major point of controversy. Some theologians believe that, at least in this life, concupiscence is insurmountable; it’s an inevitable condition of our fallen nature. No matter how hard we try, we can’t overcome our tendencies toward lust, pride, greed, and the like.

West disagrees. In his new book, he reaffirms that we can overcome this stain, even in the here and now. West is quick to point out that John Paul himself agrees with this view in his original ‘theology of the body’ talks:

“Christ has redeemed us! This means he has given us the possibility of realizing the entire truth of our being; he has set our freedom free from the domination of concupiscence.”

Neither West nor the Pope teaches that this freedom comes easy. It’s hard. Pope Benedict XVI says it involves an “undeniably painful transformation.” West explains, however, that it is nevertheless possible through heroic discipline, constant prayer, and a correct understanding of our body. Channeling the wisdom of many saints and mystics, his book unveils a threefold solution which includes purgation (the rejection of sin), illumination (a turning of the mind and will toward God), and finally union (that ecstatic connection with God where sin can’t exist).

One new area West explores in the book is suggested in the subtitle: the intersection between the ‘theology of the body’ and the “New Evangelization”. West sees the ‘theology of the body’ as a powerful “touch point” by which believers can connect with the secular world. Our culture is so charged with sexual desire that these teachings can act as a signpost, pointing to the real object of their yearnings—Jesus Christ. However, engaging the secular world may require language that strikes some as irreverent.

In trying to find the right language, West aligns himself with Pope Benedict XVI who says, “one has to meet listeners halfway, one has to speak to them in terms of their own horizon.” Finding this balance is hard, as West freely admits. It’s a process of trial and error. “We must correct errors when we err,” West says, not if we err.

And that’s what West does through his new book. At the Heart of the Gospel  is not a staunch rebuttal from a man sticking to his theological guns. It’s a humble reflection from someone who welcomes criticism and uses it to refine his own work. It will provide new insights for beginners and experts alike and continue the discussion surrounding John Paul’s magnificent teachings.

Be sure to watch my video interview with Christopher, and also check out out the Patheos Book Club this month for more great discussion about this book.