If you didn’t catch the TODAY show either of the last two mornings, they broadcasted live from St. Peter’s square in Vatican City. Host Matt Lauer had never visited the Vatican before, so New York Archbishop Timothy Dolan offered to accompany him on a special trip.

After sharing an audience with the Pope, the two discussed the current state of the Catholic Church in America. If you want to understand why I’m so excited that Archbishop Dolan is the new face of American Catholicism, watch this great interview:

TODAY show reporter Anne Thompson also featured a story on how the Church is engaging social media. (But I mean it’s not like anyone is interested in that topic or anything…..):

I was thrilled to see so many connections in the feature to my upcoming book, The Church and New Media. In the book, we devote a sidebar to Busted Halo ministries, we highlight numerous tech-savvy bishops, blogger Rocco Palmo and the Vatican Blogging Conference are mentioned, and we examine Anne’s last proposal that the Church is “sharing the same message through new means” (for the record, in line with Marshal McLuhan, I don’t think that’s possible–order the book to see why!)

The man interviewed at the end of the video, Monsignor Paul Tighe, was the one who gave me the ticket that got me to the Vatican’s roof. He’s a gracious, wise priest with an enviable Irish brogue and a sharp understanding of media. I constantly refer to him as “the Vatican’s new media guy” as he understands these tools better than almost anyone else in the Vatican.

Here’s a picture of the two of us from the recent blogging conference: 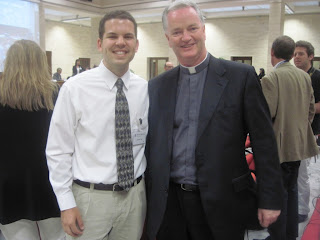 I love Monsignor Tighe’s quote in the video above where he describes the Church’s approach to new media: “We’re not just interested in talking to people, we also want to listen.” If the Church wants to use new media effectively, this must be her orientation.

Listening breeds relationship, and relationship yields an encounter with Christ. And that’s the Church’s mission in every age.