Last year, I spent a lot of time reading about two particular saints: St. Therese of Lisieux and Blessed Pier Giorgio Frassati. They were the two perfect people to spend the year with as both of them died when they were just 24–the same age I was all of last year–and they both shaped my life in many ways.

But despite their similarities, each taught me different things. I’ll talk more about Therese in the future, but on this feast day of Blessed Pier Giorgio Frassati (1901-1925), I’ll focus on him.

Pier Giorgio was a man after (or before!) my own heart. He lived to be 24 years old, was a mechanical engineer, a skilled outsdoorsman, and his two great passions were prayer and serving the poor. I probably can’t find another saint who shares so many similar traits. Because of our similarities, he was the perfect teacher.

Out of all the things he taught me, though, two things stick out. First, he showed how a suburban Christian can truly love the poor. Pier Giorgio’s dad owned a famous newspaper which meant Pier Giorgio was never short on cash. But instead of spending it all on himself, he constantly emptied his pockets for the sake of his poor friends.

He could afford nice clothes, fancy meals, and stylish cars. But he almost never indulged. In fact what was Pier Giorgio’s response when asked why he always rode in third-class? Because there was no fourth-class. Such was his devotion to standing with the poor.

Despite his profound compassion, though, Pier Giorgio never moved into a poor neighborhood or took a vow of poverty. He showed that you can love the poor as you are, where you are. You don’t have to be be a social service agent or move into the slums. You can love just as you are right now. Whatever job you have, however much money you make, however busy you seem to be, you can still live with deep compassion. 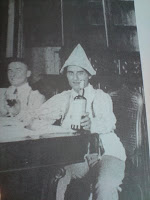 Pier Giorgio also taught me the magnetic power of joy. Throughout his life, young people flocked to him not only because of his holiness but because of his smiles, pranks, and contagious laughter (and as the patron saint of young people, they still flock to him.) Pier Giorgio once placed a donkey in the bed of an unstudious friend, a sign that the lazy boy was being an ass. And he was known to shortsheet the beds of friends and priests whenever they went on retreat.

His lightheartedness and deep, rumbling laughter were some of his greatest evangelistic tools. People want joy, and when they taste it in another, they want to know its source. Many of Pier Giorgio’s friends found God after first discovering Pier Giorgio’s joy.

There’s plenty more that Pier Giorgio has taught me–commitment to the Rosary, devotion to the Eucharist, the necessity of prayer, and love for the outdoors. He’s such an incredible saint, yet still a profoundly “ordinary” one. His life and spirituality are so rich that he really is worth studying more deeply.

To help with that, here are some short reviews of the three books I read on Pier Giorgio. Unlike Therese, Pier Giorgio is not the focus of many books, so the pickings are few. But even within the small selection, these three stand out.

A Man of the Beatitudes

As far as I know, Luciana is the only relative to write a book on Pier Giorgio. In this book, Luciana, Pier Giorgio’s sister and best friend, offers an intimate portrait of his life and death. She also reveals how misunderstood Pier Giorgio was by his parents.

Their father was an atheist, and their mother was nominally Christian, but both were uncomfortable with Pier Giorgio’s piety. They were extremely worried that their son might become a priest and were also troubled by his mingling with the poor.

This discomfort regularly boiled over into frustration. Pier Giorgio’s mother often scolded him for showing up late to dinner after serving the poor (he usually had to run home after giving away his bus-fare money.) His father chastised him for coming home without a coat, a regular occurrence since Pier Giorgio gave away his own clothes to anyone in need.

Besides revealing the tension with his parents, the book also frames Pier Giorgio’s life in light of the eight beatitudes, which I found both interesting and appropriate. At Pier Giorgio’s beatification, Pope John Paul II deemed him a “man of the beatitudes” and it’s clear why. Pier Giorgio was meek, he was a peacemaker, he was poor in spirit, he hungered and thirsted for righteousness, and he embodied all the rest of the beatitudes. The core of Jesus’s most famous sermon was the core of Pier Giorgio’s entire life. That’s why he’s a saint. And that’s why his life is so attractive.

Of the all books and articles I read on Pier Giorgio throughout the year, A Man of the Beatitudes was definitely my favorite.

In many ways this book is similar to A Man of the Beatitudes. It covers many of the same themes. However, it does differ by being more detached (it’s not written by someone as close as Luciana) and it devotes an entire chapter to one little-discussed aspect of Pier Giorgio’s life: his secret, suppressed love for a young girl.

During one of his regular mountain climbs, Pier Giorgio fell head over heels for a fellow-hiker named Laura. His journals and letters reveal just how instantly and deeply in love with her he was, and it wasn’t long befroe he decided that that he wanted to spend the rest of his life with her.

But he knew his parents wouldn’t approve. Laura wasn’t part of the upper class, and she was a Catholic activist, both strikes against her in the eyes of his parents. Pier Giorgio knew this would cause serious problems within his family, and since his relationship with his parents was already tumultuous, he never once revealed to them his secret love. He gave it up quietly, quitting his pursuit out of honor for his parents. For better or worse, right or wrong, the episode puts Pier Giorgio’s utter selflessness on full display.

This book had the fullest treatment of this whole episode, which makes it a nice addition to any Pier Giorgio collection.

The Soul of Pier Giorgio Frassati

The book includes diary entries from a 17-year-old Pier Giorgio which tally his monthly communions and Rosary decades (26 communions and 145 decades in December 1919.) The book lays out Pier Giorgio’s spirituality along two poles, the Holy Eucharist and the Blessed Virgin, and explores his devotions to each.

The Soul of Pier Giorgio Frassati also reveals his deep prayer life. Pier Giorgio was known to lose himself in prayer quite often. On one occasion, the book explains, he became so lost in prayer that he was oblivious to the candle wax dripping onto his head.

Finally, this book presents an interesting look at Pier Giorgio’s discernment process. When trying to determine what he should do with his life, Pier Giorgio considered becoming a priest. But he then asked a key question: “which vocation will give me the most contact with the poor?”

He decided the answer was to pursue a lay vocation and a career in engineering. His method stands as an alternative pattern for young people who are usually first encouraged to discern their state of life before finding their individual charisms. Pier Giorgio, the book shows, discerned the other way around. He first determined that his calling was to directly serve the poor, and then he chose the vocation that best enabled him to do that.