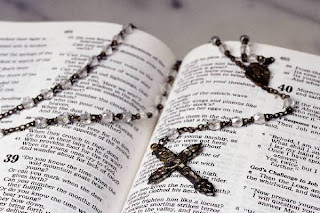 As a Protestant, Scripture memorization was a strongly emphasized spiritual discipline. This made sense, as a faith based solely on the Bible begged deep familiarity with its source. Though Catholicism balances–and interprets–the words of Scripture with its ancient Tradition, the Bible still remains a significant source of Divine Revelation for Catholics. In theory, the Catholic Church doesn’t hold a lesser view of Scripture than Protestants, but a greater view of Tradition; the Bible isn’t subverted to Tradition, but Tradition is elevated up to the Bible.

While many of the greatest Scripture scholars of the past and present are Catholic, the average Protestant . Fortunately, forces have been changing that reality, promoting a greater Biblical awareness among laypeople. Protestant Biblical devotion has crept into Catholic circles, Vatican II’s call to “universal holiness” has made personal Scripture study more common, and a number of teachers, catechists, and authors are opening up the depths of Scripture for many Catholics. Also, the effects of a recent Church synod on Scripture will undoubtedly produce more devotion to the Bible. Combined with various renewal movements, these shifts have led millions of Catholics to reflect daily on Scripture.

But while much progress is being made in the Catholic Church, I continue to be energized by Protestant devotion to Scripture. Despite my conversion to Catholicism, I never stopped devouring blogs, books, and sermons by Protestant pastors, in part because I still savored their love for the Bible.

Baptist pastor John Piper has significantly influenced me in this regard. John, to put it simply, has a love affair with Scripture. He lives, breathes, teaches, and devours the Bible like nobody I’ve seen. While his theology and sole emphasis on the Bible often clash with my Catholic understanding, I have still been deeply inspired by his complete devotion. Many Catholics–lay and clergy alike–could learn from John’s deep appreciation of the Bible.

John’s devotion to Scripture includes a particular emphasis on memorization. While Scripture memorization isn’t explicitly discouraged by the Church, it isn’t emphasized as strongly among Catholics as it should be. The Bible itself, though, points to the vitality of memorization.

The first Psalm encourages us to “meditate” on God’s word day and night; deep meditation, in this case, leads to memorization. In Jesus’ desert temptation, we see both Jesus and Satan using memorized Scripture as weapons for spiritual warfare. Good and Evil forces alike understand the potency of Biblical memorization. When it comes to memorizing Scripture, Catholics can learn much from our Protestant brothers and sisters.

To that end, John Piper has some blog posts discussing Scripture memorization:

– “Why memorize Scripture?” – On the importance and value of memorizing Scripture.
– “How do you memorize Scripture?” – Practical advice on memorizing sections of the Bible.
– “How do you remember Scripture you’ve memorized?” – John explains that, “You should be learning hundreds of Bible verses by heart, and forgetting 90% of them.”
– “Models of Scripture Memory” – Notes a pastor who recited the entire book of Hebrews from memory as his sermon, and another pastor who recited the entire Sermon on the Mount.

May we fall in love with the words of our God, laying them deep within our mind and heart.

(For more on John Piper, check out his ministry’s blog, Desiring God.)