Earlier that month, Fulton had appeared at the National Prayer Breakfast in Washington D.C. He had accepted the invitation against the advice of his cardiologist, Dr. Bruno, who accompanied him to the event. Officials asked Billy Graham, who was present, to be ready to fill in should Sheen be unable to carry on. Graham wrote later, “Even as he made his halting way to the podium, I silently prayed that God would grant him the necessary physical and spiritual strength.”

“Mr. President,” Fulton began, turning toward the chief executive and his wife, “you are a sinner.” Having everyone’s undivided attention, he then pointed to himself and said, “I am a sinner.” He looked around the huge ballroom at the sophisticated and influential spectators, and continued, “We are all sinners, and we all need to turn to God…” Graham wrote, “He then went on the preach one of the most challenging and eloquent sermons I have ever heard.”

Jimmy Carter, who had often watched Sheen on television, wrote many years later, “It was a real pleasure and an unforgettable experience for me to meet him in person, and I especially appreciated his coming to National Prayer Breakfast while I was president. With the possible exception of Billy Graham, Bishop Sheen was the most well-known and admired person there–including presidents and other dignitaries.”

Sheen was known for these ‘grabbers’ at the beginning of each talk. He liked to begin with a shocking or profound line that hooked the audience from the get-go. And then he had them.

To learn from this master speaker, check out my post on How to Give a Talk Like Fulton Sheen. And be sure to pick up Reeves’ great book, America’s Bishop. 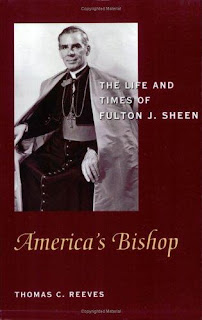