Since putting together The Church and New Media, a number of people have asked what I hope to accomplish with the book.

First, I want it to help people use new media more faithfully (and I really think it will).

I also hope it inspires parishes, dioceses, and Church officials to embrace these powerful tools.

But maybe just as much as those two desires, I want the book to be a good story.

In A Million Miles in a Thousand Years, Don Miller argues that all good stories follow the same basic outline: a character, who wants something, and overcomes conflict to get it. In the best stories, that “something” is selfless in nature and requires sacrifice to get.

For example, Frodo wants to destroy the Ring and risks death to overcome Sauron, Gollum, and the orcs to do it. Jack wants to win Rose’s heart and gives his life to gain her love. God wants to redeem the world, and gives his only son to defeat Evil and restore the cosmos. Tons of other stories follow this same pattern.

So why does this matter to my book? About a year ago, I was praying and my head was swirling with thoughts. I felt like God wanted me to put together this book on new media, but that He wanted more than just a book.

Through reflection I realized that God had given me a good job, which paid enough to support our family. I didn’t need to make any money off this book and, as Augustine said, what I didn’t need was needed by others.

I also considered what a boring story it would be for me to hoard any royalties the book produced. That wouldn’t exhibit any of the traits of a good story–no conflict, no selflessness, no sacrifice.

All of these swirling thoughts eventually crashed into each other and I finally realized what God was trying to tell me:

He wanted me to write a book on new media, and he wanted it to be a good story. And giving away the royalties would do just that.

(I wrote more about this realization in my post on side hugs, the story of my book, and my plan to change the world. You can safely assume it was half as noble as it sounds.)

In the following months, I worked with some friends at Catholic Relief Services (CRS) to set up a project for the royalties–a computer lab in the Diocese of Mombasa, Kenya. We decided that all of the book royalties would go toward buying computers for the lab and to pay for a computer literacy instructor, as well.

Even though The Church and New Media hasn’t been officially released yet, CRS has already fronted a large sum of money to the Diocese of Mombasa so they could begin their work.

Today, CRS sent me some of the first pictures of the lab in action. The lab is in the Good Shepherd Catholic Training Center in Ukunda, Mombasa. It’s outfitted with ten new computers and flat-screen monitors, and the training has already begun: 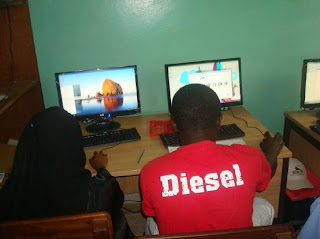 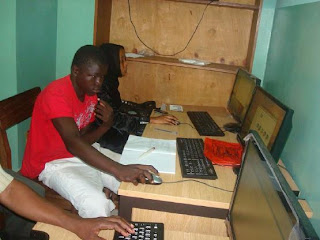 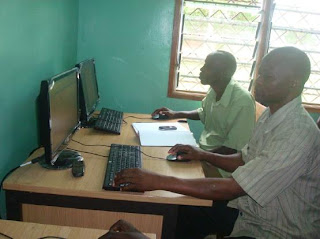 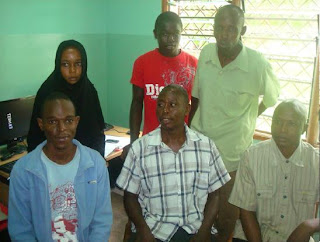 So why am I telling you all of this? Is it to highlight how pious and humble and charitable I am? No. On my best days I barely approach those virtues, but most of the time I’m far, far away.

I’m sharing this to reveal how you are changing a small corner of the world. I’m not providing that computer lab. And neither is the book.

You are doing this.

The desks, the computers, the flat-screen monitors, and everything you see exists because people like you are ordering the book.

If you’ve already pre-ordered your copy, you helped make this happen. If you plan to order a copy, you too will participate. And if you’re debating whether to buy a copy, I hope this will tip you over the fence.

It’s rare to find a book that contains great content and gives you the chance to to participate in a good story.

The Church and New Media offers you both.

(In addition to buying the book, you can also donate directly to the computer lab project through the Catholic Relief Services website: http://donate.crs.org/computerskenya.

And if you haven’t ordered your copy of the book yet, you can buy it at the Church and New Media website.)