A few days ago, I attended a Theology-on-Tap celebration in the Diocese of Orlando which featured a talk given by the illustrious Joseph Pearce.

Pearce is literally a ‘gentleman and scholar’. His British idioms, sharp intellect, and refined charm evoke one of my favorite writers, C.S. Lewis, whom Pearce is vaguely familiar with. And when I mentioned that I entered the Catholic Church a couple of years ago–citing C.S. Lewis and G.K. Chesterton as huge reasons–he seemed genuinely excited.

Pearce is an expert on the literary giants of the last couple centuries, specifically Lewis, Chesterton, J.R.R. Tolkien, and Hilaire Belloc.He’s also written extensively on his belief that William Shakespeare was secretly Catholic.

The talk Pearce gave to our group was titled “Unlocking the Catholicism of the Lord of the Rings”, which revealed the tantalizing Catholicity hidden within Tolkien’s masterpiece. From The Ring’s symbolism of ‘original sin’ to Gandalf as a Pope figure, discovering the Catholic images was like unwrapping one Christmas gift after another.

I strongly recommend any of Pearce’s literary biographies or any of the Ignatius Critical Editions that he edits. On the side, Pearce also finds time to edit the “St. Austin Review”–which I’ve heard great things about–while teaching Literature at Ave Maria University in South Florida.

(You can download Pearce’s “Unlocking the Catholicism of the Lord of the Rings” talk for free from Ave Maria University’s podcast page. Right-click here to save the talk to your computer.) 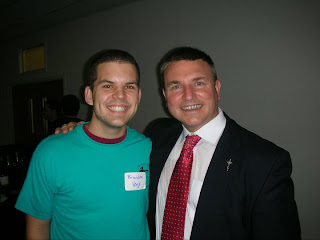