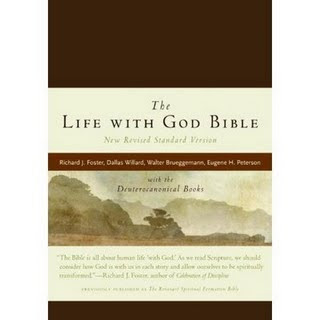 A few years back, a large group of biblical scholars and devotional writers pooled their collective talents to birth the “Renovare Spiritual Formation Bible”. The project was headed up by Richard Foster, the author of the modern-day spiritual classic “Celebration of Discipline”. The “Renovare Bible”, while praised for its content, received mixed reviews because of its gigantic size; it looked more like a dictionary than a daily study Bible.

Well, the fine folks at HarperCollins have fixed that. In what popular writer and pastor John Ortberg calls, “the most spiritually-impactful Bible our time”, the “Renovare Bible” has been re-released in a smaller size and has been renamed “The Life With God Bible” (Harper Collins, 2,448 pages, $44.99).

I went through a period of a couple of year in college when I was infatuated with study Bibles. At one point I probably had at least ten different versions. The more I became drawn into theology and serious study of the Bible, as opposed to light, devotional reading, the more I hungered for a Bible filled with insights, commentaries, and notes. However, it seemed to be an empty pursuit. I never was able to find a Bible that was had enough study material to satisfy while also being practical enough to lug around and use for daily readings. Thus was the paradox: the better the content, the bigger the Bible. Also, the more academic the content the less relevance and practical the Bible tended to be.

So after discovering the “Renovare Bible” a few years back, I was intrigued by its content but immediately put off by its bulkiness. I doubted very much that I would be able to use the huge book as my every-day Bible. Yet, the names of the contributors at least matched the Bible’s own weight and were still hard to pass up. After reading the who’s who in the list of authors, I couldn’t help but lick my chops. Spiritual heroes like Dallas Willard, Richard Foster, Walter Brueggemann, and Eugene Peterson—some of my favorite writers, even now—beckoned readers to open the “Renovare Bible”. Those men are the modern day Apostles in the Evangelical world. It was tempting not to purchase the “Renovare Bible”, but I eventually passed because of its sheer bulkiness.

Fast forwarding a few years, the “Renovare Bible” has been reborn—or “born again” to use a more explicit Christian phrase. The folks at Harper Collins have solved the greatest problem with the Bible—its overall size—and have accentuated the change by offering a few different cover styles for the new rendition. I was mailed to a copy of the “Life With God Bible” through HarperCollins Publishers—the version I received is enclosed by a dark brown, imitation leather cover. There are, in addition, paperback and hardback editions available.

Aside from the size and cover changes—which again were the only downside I saw to the original “Renovare” version—the “Life With God Bible” is loaded with the same spiritual richness that was found in the “Renovare Bible”. The Bible itself is aimed at one thing: fostering intimacy with God. This Bible doesn’t seek to provide the abundance of scholarly notes that other study Bibles do, nor does it offer quaint, feel-good reflections on the texts. It instead approaches the words of the Bible through the spiritual disciplines—which include fasting, prayer, chastity, celebration, etc.—in order to nurture authentic spiritual formation in the reader.

Richard Foster and Dallas Willard are probably the two biggest propagators in the resurgence of interest of the spiritual disciplines, primarily through their two books “Celebration of Discipline” and “The Spirit of the Disciplines”, respectively. The purpose of these disciplines is not necessarily to aid in the ‘knowledge’ of God—though some surely do—but to aid in the transformation of our life into that of Jesus. Intimacy and transformation are at the backbone of this “spiritual discipline” movement.

In addition to viewing the main text of the Bible through the lens of the “spiritual disciplines”, the “Life With God Bible” also features many articles, background information, and profiles of major Biblical characters. As a Catholic I also strongly appreciated the inclusion of the Deuterocanonical books in the Bible. These books add to broad audience that this Bible serves; after reading a few articles and the entire chapter of Mark, I found nothing that would be considered “unorthodox” or disagreeable to the teachings of the Catholic Church. So while the editors–and the main audience–of the “Life with God Bible” seem to all be Protestants, this Bible can be used just as fruitfully by Catholics as their ‘daily-Bible’. The Bible uses the NRSV translation that is a solid mix of modern language and literal translation; it is probably the most common crossover translation used by both Protestants and Catholics.

In short, I think this is the Bible I will be using for my daily readings, at least for the near future. It is academic enough for a scholar and practical enough for a disciple. It is serious while not being overly difficult. Rare is the Bible that balances both aspects of the Faith. If you are looking for a study Bible filled with historical and cultural insights, this is not be the best choice for you. And if you are looking for a Bible that offers comforting notes or quotes alongside the text, this may not be the best Bible for you either. But if you are looking for the best of both worlds, check out the “Life With God Bible”.

(For a solid review of this Bible from a distinctly Catholic perspective, check out the “Catholic Bibles” blog. Also, if you would like to preview the “Life With God Bible” you can read some samples from it below.)