Back in ninth-century Moravia, two brothers named Cyril and Methodius set out to evangelize. The Moravian people were religiously inclined and open to the Gospel, but there was a big problem: they had no alphabet. The two evangelists, therefore, had no way of sharing the Bible or other liturgical texts.

Yet that did not stop them. They studied the native language, and over time created an entire alphabet from scratch. The new Slavic script became a bridge between the evangelists and the natives, a common language through which their missionary work could take root. Eventually, the two men were made saints and are beloved heroes in the East and the West.

I share this story because it provides a great model for us today. If our aim is evangelization, then like Cyril and Methodius we must study today’s language. And by ‘language’ I don’t just mean words; I mean the tone, the style, and the form. For it’s only once we understand and speak the language of modern man that we can evangelize him. Ryan Scheel gets that. He’s studied how people communicate today and knows that it’s mostly digital. Modern communication revolves around video and pictures, with a strong emphasis on sarcasm and humor.

Over the years, Ryan has created several websites to speak this language including uCatholic.com and the massively popular CatholicMemes.com. His work is the perfect response to Pope John Paul II’s call for “new methods, new expressions, and new ardor.” It demonstrates that when we present old truths in fresh language, people respond.

Ryan recently sat down with me to discuss his work, the role of humor in evangelization, and the intention behind CatholicMemes.com. I think you’ll be pleasantly surprised to discover the intention and missionary attitude which ground all of his work. Read below and enjoy! 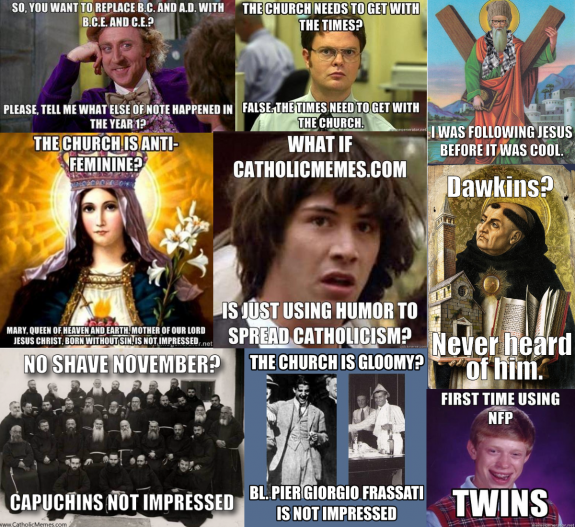 Q: Let’s start with a basic question: why memes?

Over the past four years, I have started and administered dozens of online initiatives, such as uCatholic, Ask A Catholic Priest, Ask A Catholic Nun, and Catholic Saint of the Day. This Catholic Memes site is just the latest and honestly, its inception was more reactionary than anything else.

Through my work with uCatholic.com and in social media, I’ve become pretty well-versed in the culture of the internet. It really is its own unique culture. Memes are a pretty organic development and expression of how the internet culture converses. It’s almost its own, self-developed, hieroglyphic language. But as in any culture, and with any language, you will encounter the equivalent of “bathroom wall” graffiti.

As I’m sure you well know, there is the phenomenon of the “Internet Troll”. If one tries to have high-minded, civil discussion on a subject such as Aquinas’ Cosmological Argument or the significance of the Battle of Lepanto on a publicly accessible Catholic page, sure enough, you will invariably encounter the one person who feels compelled to post an anti-Catholic meme. After the first few hundred times, it gets a bit annoying and tries one’s virtue.

So I did what Catholics have historically done throughout the ages; appropriated a secular concept and refashioned them for a higher use. If memes are the language of the internet, the Church’s teachings need to be translated into them just as they would for any other culture.

How many young people are going online and reading papal encyclicals or commentaries on the writings of St. Athanasius? Sadly, too few. Instead they are watching YouTube videos, going on Facebook, tweeting, or browsing Redditt. So if the internet and social media are the new Areopagus, as Pope John Paul II and Pope Benedict XVI have pointed out, we need to understand and speak the language to convert both the individuals and the cultures congregated there. It’s a type of digital missionary work, and a missionary must speak the language to be successful.

Q: Memes are known for their pithiness and irony. Why do you think that style is so effective today?

Memes, or their cultural predecessors, the propaganda poster, the medieval tapestry, the Roman engraved arch, street graffiti, and even the Catholic stained glass window, are extremely effective in that they have the ability to contain, articulate, and transmit a complex concept in a glance. This brevity makes sense in today’s world when a message, secular or religious, economic or artistic, is in heavy competition for attention. Often times, you may only have a fraction of a second; the time it takes to scroll a webpage, to catch somebody’s eye. So you better make that count.

Additionally, if you think of Our Lord’s use of the parable, it is not that dissimilar to the internet meme. He would tell a short, ironic story, using the imagery familiar to a first century Judean, in order to convey His Divine teaching.

Q: Another feature of memes is that they usually touch upon popular culture. You’ll find memes with Willy Wonka, Batman, singers, celebrities, and more. From a Catholic perspective, why is this so important?

Fr. Robert Barron, who for my two cents is the best voice in the New Evangelization today, truly a new Venerable Fulton Sheen, has talked many times about the importance of knowing the culture if you wish to convert it.

Right now, the Church’s biggest cultural challenge is secularism, a culture that is satisfied with itself and not with seeking higher truths. It’s a culture whose only end is more of itself, a culture addicted to itself. So to wake the culture from its malaise and amnesia, to help it remember who it is, with all its deep Christian roots, and to eschew philosophical and moral complacency, we need to engage it at eye level. It’s a culture addicted to banality that needs to be weaned slowly back from secularism to a pursuit of Christ and the fullness of the Church’s teachings.

Pop culture is the amorphous symbol of secularism, but just like some Catholic symbolism has been absorbed from the paganism it superseded, such as the Christmas wreath or the Easter egg, there is no reason pop culture cannot be appropriated and used to illustrate a higher truth. Q: As the New Evangelization moves forward, many Catholics are looking for fresh ways to spread the faith. What role does humor have in evangelization?

I think humor will be effective in the New Evangelization in two ways: introducing Catholicism by dispelling misconceptions about the Church to non-Catholics, and strengthening those Catholics who are struggling to hold onto Peter’s barque.

For non-Catholics, we can use humor as a way to engage and break the ice. I know this is not the true Catholic sense of the term, but we are the Church Militant, and any “military” would prefer if the other side was disarmed; it makes their job a lot easier. Humor disarms people intellectually and opens their minds to consider different concepts and new thoughts. If we are authentically Catholic and truly funny, we can introduce the Church to many people and dispel some of the uglier misconceptions the world has of us.

Now it’s another issue for those who are Catholic, or who were raised Catholic but have fallen away. In the post Vatican-II confusion, and afterward in the light of the sex abuse scandal, it has been difficult for Catholics to rejoice in and outwardly exude their Catholicism. We’ve lived in a culture that has told us to feel bad for our identity. It has not been a fun few decades; in fact it has been challenging. But as we emerge from that era and go forward, we need to joyfully and whole-heartedly embrace our faith, identity, and role as “a people in the midst but apart”.

St. Irenaeus of Lyon said “The glory of God is man fully alive!”, and what better sign of life is there than laughter and joy? Proverb 17:22 tells us “A joyful heart is the health of the body, but a depressed spirit dries up the bones.”. A little humor and light-heartedness can go a long way to stirring up the love people have for Our Mother, the Church, and help bring them home.

Q: Through your work on Facebook, uCatholic.com, and CatholicMemes.com, what type of feedback have you gotten from both Catholics and non-Catholics?

The response has been encouraging and genuine. It’s easy for me to see how badly people are thirsting for the unchanging truth, strength, and beauty of the Church in the midst of the sterile aridity of modern relativistic secularism.

But it’s not to my credit, and it’s not like I’m doing anything special. I’m like the janitor who sets up the chairs in the auditorium so people have a place to sit when the music starts or the lecture begins. People respond to the Church’s message when they have access to it where they are.

The Church has 2,000 years of unmatchable intellectual and spiritual treasures stored up. But, they are not always displayed or accessible to those in the modern world that is so congested with constant novelties. They want “it”, they just don’t know what “it” is, and where to find “it”. We just need to share it with them!

How beautiful and new would the writings of St. Thérèse of Lisieux be to this culture? How stirring and soul shaking the words of St. John of the Cross? How stimulating and profound the thought of St. Thomas Aquinas? How inspiring and provocative the story of St. Damien of Molokai? It’s not like we have to change or develop anything new to reinvigorate people, the Church is “ever ancient, ever new.”

Most importantly, if we can help people to just listen to the words of Lord with “ears to hear”, they will see how dramatically life-changing they truly are. If we can get people to consider just how the Crucifixion and Resurrection of Our Lord changes absolutely everything forever, then we are living our call to spread the gospel. Pro Christo Et Ecclesia! What’s your experience with memes?