I was recently having dinner with some friends, and the discussion turned toward Catholic social-justice. This got me really excited, because one of the things that drew me into the Catholic Church was her rich body of social teachings.

Through papal encyclicals, episcopal teachings, and the examples of the saints, I have become convinced that the Church offers the wisest, most compassionate, most effective response to the ills of our world. She proposes the clearest picture of what a just society looks like and, even further, explains how to make that vision a reality.

Unfortunately, most Catholics are completely unfamiliar with Catholic social teaching. Even worse, those who are informed typically isolate themselves into one of three distinct camps, dampening the effects of the Church’s wisdom:

These are rough and broad generalizations but the dividing lines between them are real and distinct. Archbishop Timothy Dolan of New York sees the same thing:

So back to our dinner conversation. One of my friends suggested something I first thought was off-the-wall, but that I eventually recognized as brilliant. He argued that in light of the general apathy toward social-justice–mainly on the part of ‘Spiritualist Catholics’–the Feast of the Visitation should be promoted as a pro-life feast day. (He later wrote up his thoughts in this article.) 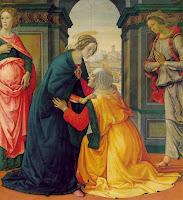 The more we discussed this, the more I agreed. But I suggested we take it even further: the Visitation could be celebrated as the Patron Feast of Justice. And even more it highlights the focus of all three social-justice tribes, and therefore has the potential to unite them.

In terms of spirituality, the Visitation lies at the heart of the Rosary, a prayer that grounds all Catholic activists in the humility, obedience, and faith of Our Mother. Without prayer–without submission–we become nothing more than busy-bodies, social activists in the mold of Jesus’ friend Martha. Mary’s proclamation provides the spiritual foundation for the other two tribes.

Next, as Mother Teresa pointed out, it’s strange that the Savior of the World was first recognized by an unborn child, one who leaped for joy at the presence of his Lord. This has profound pro-life implications: it means that our faith was launched by a kick within a womb, christened by a yet-to-be-born prophet. God, apparently, places great value on those who society places little.

And finally, the Visitation takes place not in the halls of a great palace, not in a gated suburban community, but in the dust and dirt of the poor town of Hebron. Catholic social teaching posits that God is found most concretely in two places: in the Eucharist and in the poor. And Mary’s womb holds both. Loving God is inseparable from loving the poor.

If we want to flourish, we need all that the Visitation offers: we need humble prayer, we need to value the dignity of all, and we need to dwell with the poor. These three elements bring together Mary and Elizabeth and, for the first time, Jesus and John the Baptist. And they can unite our three social-justice tribes in precisely the same way.