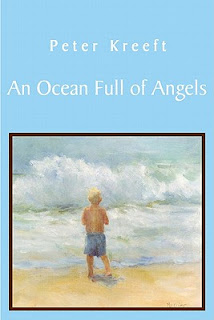 Only two books have ever compelled me to pray immediately after finishing. One is Tolkien’s masterwork, The Lord of the Rings, and the other is a new book by Dr. Peter Kreeft titled An Ocean Full of Angels (St. Augustine’s Press, hardcover, 375 pages).

Why that effect? I think it’s because both books are epic stories, and both authors are poet-scholars. First, stories are some of the best vehicles for truth. Lord of the Rings can tell us deeper things of good and evil than most textbooks on moral theology. An Ocean Full of Angels is in the same mold. And when you hear truth that pierces your soul, you can’t help but pray.

Second, while Tolkien would deny being a philosopher, and Kreeft wouldn’t call himself a poet, both are enormously gifted at each craft. Both writers blend truth with beauty and the result is soul-stirring prayer. Either one alone can be boring but both together cause “a surge of the heart, a simple look toward heaven.”

Kreeft’s book, in particular, is a whimsical memoir featuring a young Muslim philosopher who is searching for answers. But what makes An Ocean Full of Angels special is that it’s a book full of wisdom. From the conversations to the plot to Kreeft’s own interjections the whole thing is profound, cover to cover.

I don’t know any other books like it. You could call the story Christian, but the main character is a devout Muslim. You could describe it as fiction, but the book is mostly autobiographical. It’s not really a textbook, though it’s packed with philosophy and theology. And while Kreeft’s book reads like a novel–that’s probably it’s most appropriate genre–it doesn’t follow the typical structure.

So how do you describe it? Well in the words of its publisher, An Ocean Full of Angels is “the damnedest novel you’ll ever read.” How’s that for a description? Even better, here’s Kreeft’s own sketch:

“An Ocean Full of Angels is an angel’s-eye view of the connections between Jesus Christ, Muhammad, dead Vikings, sassy Black feminists, Dutch Calvinist seminarians, very large Mother-substitutes, armless nature-mystics, Caribbean rubber dancers, the Wandering Jew, angels in disguise, three popes in one year, Cortez, Romeo and Juliet, the sea serpent, our Lady of Guadalupe, the demon Hurricano, islam in the art of body surfing, the universal fate wave theory, the Palestinian intifadah, the fatal beauty of the sea, dreams of Jungian archetypes, the dooms of the Boston Red Sox, the abortion wars, the Great Blizzard of ’78, the wisdom of the ‘handicapped,’ the ecumenical jihad, the psychology of suicide, and the end of the world.

But that’s an oversimplification.”

On the one hand, An Ocean Full of Angels is unlike anything Kreeft has written. It’s a far cry from his usual apologetics and philosophy.

But on the other hand, the content is vintage Kreeft. If you’ve read his other material you’ll recognize many favorite themes–Socratic dialogue, C.S. Lewis, ecumenical jihad, pro-life philosophy, the strengths of Islam, the spirituality of the sea, and surfing on God among others. By connecting all of his past work together, the book stands as Kreeft’s magnum opus, the pinnacle work of this modern sage.

His other books are beautifully written, but not like this one. Here Kreeft’s storytelling skills are on full display. He sings melodiously about Nahant, a small island-town off the coast of Boston where the whole story takes place. His lyrical love for the Nahant sea makes you want to book a trip there immediately (it is a real place.) And when Kreeft writes lovingly about Mara, the book’s beautiful heroine, his words stir like a modern day Song of Songs.

Despite its elegance, though, the book does have a few issues. For one, it’s afflicted by typesetting problems which unfortunately snap you out of the book’s trance at times. Also, the book’s plain, unattractive cover doesn’t do justice to the brilliance inside. I’m afraid many people will pass up the book after judging it merely by its cover.

When it comes to the content, I’m sure many readers will object to the book’s main character, ‘Isa Ben Adam, being a devout Muslim. Kreeft values Islam and its emphasis on spiritual “submission” and so he paints Islam in a pretty favorable light. Yet ‘Isa is balanced by a Catholic counterpart, a large, African-American woman known affectionately as “Mother”. She’s equal parts Aunt Jemima and Socrates and is one of many eccentric characters.

Overall, if you like Kreeft, you’ll like this book. But if you don’t like Kreeft, you’ll be confused, frustrated, and tempted to toss this book in the trash. Kreeft warns as much saying, “(this book) will probably “turn on” a very small audience, though I think it will “turn them on” deeply.” In my case, at least, he couldn’t be more right.

So if you enjoy Kreeft’s other material, give this book a shot. Maybe you too will finish it in prayer.

(Next week’s giveaway will feature a brand new copy of “An Ocean Full of Angels”, so be sure to enter! Also, if you want more background, read Kreeft’s article explaining the sources and motives for his book.)