A couple years ago, on my 24th birthday, I decided to spend one year studying two unfamiliar saints: St. Therese of Lisieux and Blessed Pier Giorgio Frassati. I chose them first because I didn’t know much about them, but second because they each died when they were just 24. I wanted them to challenge me with all they accomplished in the same 24 years I had, and they certainly did that.

Throughout the year, we grew close and I learned many lessons. St. Therese revealed her “little way” of holiness. She helped me see the value of secret sacrifice, that God delights in small things done with great love. Yet Pier Giorgio ultimately left the bigger mark. We just had so much more in common. St. Therese was a contemplative, French nun, who entered the convent at 15 and never left. But Pier Giorgio, like me, was an “ordinary” layman in the world. He was a young mechanical engineer, juggling the spiritual life with intense study. He was a skilled outsdoorsman who loved to scale large mountains, rosary in hand, pipe in mouth.

Pier Giorgio also loved the poor, which many stories affirm. Pier Giorgio’s mother often scolded him for showing up late for dinner. She didn’t know that he spent his afternoons serving the hungry and that he usually ran home after giving away his bus money. His father frequently chastised him for returning without his coat. It wasn’t because he lost it; he gave it away. One episode sums up his compassion: a friend once asked Pier Giorgio why he always chose third-class on the train when he could clearly afford better. He answered, “Because there’s no fourth class.”

Yet even with this deep holiness and charity, young people are especially drawn to Pier Giorgio’s ordinariness. On the surface, he seems like any other young person. He climbed mountains and played sports. He advocated for political causes. Pictures show him laughing, drinking, and joking with friends. He was a prankster known to “short-sheet” friends’ beds. One day a lazy friend awoke to find a donkey in his bed, a sign from Pier Giorgio that he was being a “jackass” by not keeping up with his studies.

There’s no other saint quite like Pier Giorgio Frassati. C.S. Lewis could have been thinking of him when noting, “How monotonously alike all the great tyrants and conquerors have been; how gloriously different are the saints.”

In his most recent video commentary, Fr. Robert Barron shares his own esteem for this unique and “ordinary” saint:

If you’d like to learn more about Pier Giorgio Frassati, check out my past posts on him (or click on his image at the bottom of my site, between Sheen and Aquinas.) You’ll also find my favorite Pier Giorgio books below:

A Man of the Beatitudes: Pier Giorgio Frassati 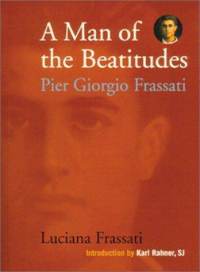 As far as I know, Luciana is the only of Pier Giorgio’s relatives to write a book about him. Here she offers an intimate portrait of his life and death.

As Pier Giorgio’s sister and best friend, Luciana had a front row seat to his parent’s deep misunderstandings of him. Their father was an atheist and their mother a nominal Christian. Both were uncomfortable with Pier Giorgio’s piety, extremely worried that he might be go overboard and become a priest. His regular mingling with the poor also troubled them and it often boiled over into verbal abuse.

Of the all books and articles I read throughout my year with Pier Giorgio, A Man of the Beatitudes was definitely my favorite. In many ways this book is similar to A Man of the Beatitudes, covering many of the same themes. However, it’s more detached, not written by someone as close as Luciana, and it devotes an entire chapter to one little-discussed aspect of Pier Giorgio’s life: his secret, suppressed love for a young woman.

During one of his regular mountain climbs, Pier Giorgio fell head over heels for a one of his fellow hikers, a beautiful girl named Laura. His journals and letters reveal the intensity of that affection. It wasn’t long before he decided that he wanted to marry her, and she felt the same way about him.

But Pier Giorgio knew his parents wouldn’t approve. Laura wasn’t part of the upper class and she was a Catholic activist, both strikes against her in the eyes of the Frassati’s. He knew the relationship would cause a serious rift within his family and so he decided never to reveal his secret love. He gave up the relationship quietly out of honor for his parents. Right or wrong, the decision highlights Pier Giorgio’s utter selflessness.

This book has the fullest treatment of this episode among other titles which makes it a must read for Pier Giorgio fans.

The Soul of Pier Giorgio Frassati

This title is more difficult to find than the other two—I found it through inter-library loan—but offers some unique insights. For one, The Soul of Pier Giorgio Frassati centers on Pier Giorgio’s piety more than his activism and social life. It’s more of a spiritual biography than the other two.

In the book we find diary entries from a 17-year-old Pier Giorgio, which tally his monthly communions and Rosary decades (26 communions and 145 decades in December 1919) and make clear the two poles of his spiritual program: the Holy Eucharist and the Blessed Virgin.

The book also reveals his deep prayer life. Pier Giorgio was known to often lose himself in prayer. On one occasion, the book explains, he became so swept up that he didn’t notice hot candle wax dripping onto his head.

Finally, the book presents an interesting look at Pier Giorgio’s discernment process. When determining what to do with his life, Pier Giorgio considered becoming a priest. But he then he backed up, and asked a more basic question: what’s my calling? He knew he was meant to serve the poor, so he wondered which vocation would allow him to have the most contact with the poor. That ultimately led him to an engineering career and a lay vocation.

Pier Giorgio’s process may help young people today who usually attempt to discern their state of life before determining their individual charism. He did it the other way around, and with great success.

Are you familiar with Pier Giorgio Frassati?